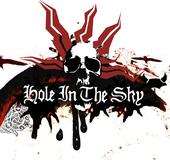 The annual Bergen metal festival has grown each year in quality, and as previous years, I went along for the eight arrangement. The festival draws a modest crowd, in comparison with the larger, outdoor festivals, and you need to purchase tickets early in advance. Although small, the crowd is international, from all corners of the world, much due to the sheer quality in booking.

I decided to go for the weekend pass, determined not to miss out on Entombed (which I’d seen the previous year), Mayhem, Testament, Sabbat, Kreator and Immortal. Come friday, and our vorspiel is great – which of course means that Entombed are unwillingly sacrificed due to beers and a fine couch. A bloody shame. Not surprisingly, this ritual repeats itself the following night, and Sabbat did without me.

USF verftet is the venue for the festival weekend, and it’s simply an awesome facility for the arrangement. At least considering the logistics and VIP areas. For the general audience, however, it’s close to crap. Too small, too crowded, and with a looming column dividing the crowd. Video screens have been placed on this hovering concrete monster, but what’s the use? USF is small enough for everyone to see the action for themselves, if it hadn’t been for the column in question. I know that the obstacle simply can’t be removed, but the great venue Teatergarasjen lies just down the road, empty. Anyway, if you know the route, there’s really no problem to squeeze past the column, and get up close and personal with the bands.

So, after the mandatory beers in the bar and cigarettes outside (fascist country), we stroll up to the stage in time for Mayhems upcoming carnage. To great ovations, the band enter the stage in the humid and extremely hot venue. Surprisingly, frontman Attila Csisar is totally wrapped in bandages and toilet paper, resembling the mummy or the hungarian ‘golem’. He performs great and unpredictable, even taking his time for a coffee and banana at the little table in front of him. It’s great comedy, especially with a crushing tapestry of malevolent black metal, churned out by Necrobutcher, Hellhammer and Blasphemer. A strange artistic and brutal performance, although some like their metal serious and leaves for the bar. After listening through their albums, I didn’t have very high expectations to be frank, but boy did they prove me wrong. 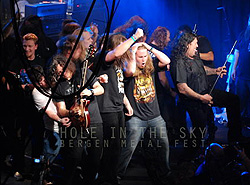 Now for the main course, and the reason I bought tickets three months in advance, Testament. The legendary Bay Area thrashers who never reached the big league, but always resounded great in my nostrils. And it’s heartwarming to see Chuck back on stage after his battle with cancer. And the gang’s all here! Eric Peterson shreds as always, and guitar prodigy Alex Skolnick seems genuinely happy to share the stage in front of an ecstatic crowd. Behind the drums are Nicholas Barker, and he seems content being back in Norway after his stint with Dimmu Borgir. The onslaught is on, and immediately a moshpits breaks out. We give all we got, and is rewarded with free entry to the stage during songs. At one point, the stage is filled with metalheads, just banging loose. Even some stagediving and crowdsurfing is in order, and it’s a true return to the old school. Needless to say, it rocked irresponsibly.

The next day ensued with no hangover; a blessing from the metal gods. After some consideration, Sabbat had to go, as I charged my batteries for Kreator. There was no chance in hell I would miss out on the teutonic thrashers, and we made it. The crowd was enchanted from the moment Mille gripped the microphone, and man, did it deteriorate into extreme aggression. With Ventor punishing his drumset and a flurry of metal thrashing mad riffs, they could do no worse. Mille drew the crowd into a frenzy, like a high priest edging us on. It was time to raise the flag of hate. I wont compare the concert to any of the others, as they all were terrific in their sense – but I’m already looking forward to the next one.

Thus came the pivotal moment of the whole debauchery. Immortal headlining the festival, seven years after their last gig in the hometown. It proved to be just the balls out, arrogant triumph we expected. Abbath in snarling great shape, alongside Apollyon and Horgh. Everybody squeezed in to catch a glimpse of the spectacle, and I was nearly crushed. But I survived long enough to see Abbath spitting flames and the earsplitting thunders of ‘At the Heart of Winter’. Truly a great show, and destined for larger venues in the future. For the sake of everyones health.